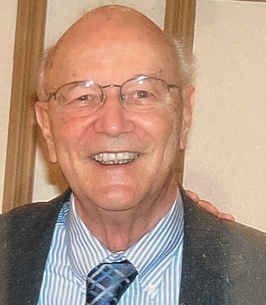 In March 2021, the German Genealogy Group celebrated its 25th Anniversary. The first meeting of the GGG took place on 7 March 1996 at the Family History Center in Plainview, New York. Don Eckerle was among the 35 people who attended this first meeting. Many of the founding GGG members and others that followed dedicated countless hours to the GGG,but Don Eckerle stands out for his role in spearheading the database project in which over 23 million records are indexed and available on our website for anyone to use.
Don will tell you that the idea of a database came up on a June day in 1999 when he was having a beer with his friend, John Martino, from the Italian Genealogical Group (IGG). John mentioned he heard that a group in Manhattan put a database on their website. Armed with a shared vision, Don and John forged ahead with a joint venture between the GGG and IGG to index records. They started with naturalization and military records from the Suffolk County Clerk’s Office.

Don always made the point that the indexes for the records are of genealogical value to everyone and available to anyone who was interested. Although the focus is on records specific to the New York and New Jersey area, they are not restricted to any ethnic group.

Over the years Don worked with numerous entities who trusted him to ensure their records were indexed properly and made available to anyone who was. Don and John worked with hundreds of volunteers who devoted their time to indexing the records, and Don worked tirelessly sorting and proofing files to ensure the highest levels of accuracy. He continued to seek records to index and volunteers to learn his tasks in preparing the files for the databases on our website.

Don, along with John Martino of the Italian Genealogical Group and Bob Boeckle of the GGG, received the National Genealogical Society Award of Merit in 2014Don served one year as President of the GGG in 2002 when he succeeded Hans Schrader, the first President. The following year in June 2003, Don nominated Elizabeth Lovaglio for President, and he served as the Vice President ever since. He has represented the GGG with our sibling genealogical societies and German associations and has supported and participated in a myriad of GGG events.
In 2021 Don stepped down as the Vice President of the GGG, but continued in his role on the Board, of which he was a member since the organization’s inception. Don also remained as the GGG Database Administrator.
We celebrated with Don in reaching 23,000,000 indexed records in our database later in 2021, and applaud him for his even-handedness and longevity in moving the GGG toward this remarkable milestone.

He was interviewed in December 2020 as part of an oral history project conducted by the Italian Genealogical Group. You can view it here.
...